Can Energy Shots Be Effective?

The market for energy drinks appears to have grown in recent years, and several of its top producers are now creating "energy shots," which are smaller versions of their bigger counterparts. They are packaged in a 50 ml (or around 2 fluid ounces) bottle rather than a typical sixteen-ounce bottle or "monster" can, allowing for one rapid sip of consumption. The effectiveness of the lesser choice is called into question when comparing it to the bigger one. 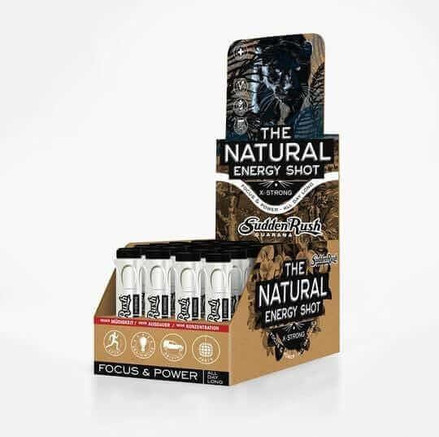 Tips: The Energy shot drinks keeps you alert and increase your blood circulation while awakening your senses for a busy day ahead. Packed with natural herbs and stimulators.

Read the label to find out the truth. This is especially true now when new rules call for the disclosure of all contents and adverse effects on nutritional or medicinal items sold in stores, including the components of energy drinks. About 80 mg of caffeine may be included in the majority of energy beverages. Additionally, they include guarana, ginseng or ginkgo biloba, taurine, maltodextrin, inositol, carnitine, creatine, and glucuronolactone among other substances. Supplements containing concentrated vitamins and minerals make up a sizable portion of these substances. Many of them are present at 100% or higher if you check at the RDA on the bottle.

Both the larger energy drink and the much smaller energy shot have about the same amounts of each component, according to the labels on their respective bottles or cans. Consider this. A little 50-milliliter bottle contains 80 mg of caffeine. You will consume it in far less time than it would take to consume a typical cup of coffee. The energy injection could be the answer if you're seeking that additional boost in a discreet package.

On the other hand, there is significant debate over the long-term consequences of an energy shot. If you crash a few hours after taking it, is it "genuine" energy? That slump is undoubtedly brought on by sugar, but what about caffeine or other ingredients? That blast of caffeine and sugar is much more likely to cause you to crash at some point during the day than an energy shot, which is most likely to have a large quantity of Vitamin C or other supplements to boost the effect. If you're keeping track, the average American drinks at least one cup of coffee or glass of soda in the morning to "wake up."

Therefore, those little energy doses may have a history on their side in addition to being successful.